After 12 years, Jorgenson hangs up hat as MAPE President

“Nothing was ‘normal’ anymore after the economic collapse of 2008,” Jorgenson said. “Then the Republicans took over the legislature in 2011 and every year since we’ve faced a new challenge we’ve never had before. We had a new normal where it was less certain every year whether our contract would pass.”

While many public sector unions across the country were deteriorating from political attacks and weakening membership numbers, Jorgenson was at the helm of a union that would rise to the challenge and come out stronger on the other side.

In 2008, the GOP threatened reduced salaries, increases to healthcare costs, cuts to public employee pensions and a two-week furlough for state employees proposed by then-Gov. Tim Pawlenty. When Jorgenson heard this, he was fuming.

“I said ‘Why would we put up with this? Let’s fight it,’” Jorgenson recalled. “I think the organization was caught off guard that instead of complaining we were going to fight it and in a new way.”

At this point MAPE employed a single communications professional and had no staff solely dedicated to organizing, so leadership hired experts to craft powerful messages, buy radio ads and help build capacity to organize members.

“When all that came together, we came up with $120 million in cuts that wouldn’t lay anyone off or interrupt our services,” Jorgeson said. “We held a press conference and got $1 million of free publicity because every news network carried our story that night.”

And for two weeks after that, reporters continued asking Gov. Pawlenty about the changes MAPE proposed. When a reporter asked Gov. Pawlenty if he planned to take the two-week furlough himself, he said “no,” and that was the end of the push for any kind of public employee furlough.

“What that did is it proved my confidence in what our union could be. We could organize, advertise and negotiate all at the same time and we could achieve more than just negotiating at the bargaining table,” Jorgenson said. “That really set the stage for bringing MAPE into the 21st century.”

This century has brought challenges of its own – annual attacks on public pensions and healthcare and Supreme Court cases Friedrichs and Janus that threatened to dismantle unions like MAPE. But MAPE was poised to weather the storm thanks to years of strategic planning and a noticeable shift from representation to organizing within its membership.

“I’m most proud of helping move MAPE from being an insurance company where people pay dues and expect a contract and representation to turning it into a real union where members are active,” Jorgenson said. “I had to make a lot of hard decisions; dues increase included. Hard decisions made years ago set MAPE up to be the leader among unions and in public policy debates and decisions we are today.”

MAPE Executive Director Lina Jamoul agreed, crediting Jorgenson with supporting the union through all its ups and downs.

“We wish Chet the best of luck and thank him for his service to all MAPE members.”

After 12 years helping cultivate the landscape of MAPE, Jorgenson said he plans to enjoy this summer catching up on the farmland chores he has overlooked at home, and apply some of the interests and knowledge he’s collected from MAPE to other causes he’s passionate about.

As the organization celebrates Chet’s 12 years in office and the progress that has been made, plans are in motion to transition to the new President, Megan Dayton, who takes office on June 19. 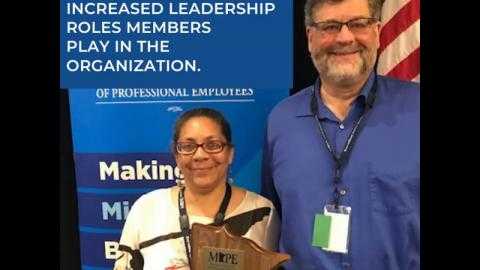